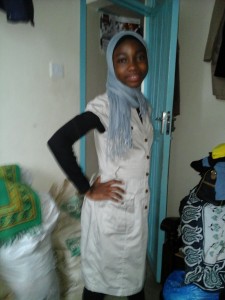 Last week we embarked on a process of tracking down all the students who have passed through the centre. We want to know what has happened to them. Especially those that left before 2010 because some of them will be sitting for their national primary school examinations this year.

So over a couple of weeks I will be posting about these HoL Alumni. To get us started today is Rukia Aslam. Rukia joined the centre in 2008 in and left in 2010. She is now a pupil at Moi Forces Academy in Eastleigh, Nairobi and will be sitting for her national examinations next year.

Rukia’s Mom says that the education that she got at the centre laid a firm foundation that enable her to excel in her education after she left the centre. So much so that when she joined Moi forces academy she had to jump a grade because she was so much ahead of the other children in her class.